Avery @ B for Bookslut

I have given Glimpsed by G.F. Miller a ☆☆☆☆ rating. It is a standalone. It is Young Adult Contemporary Fantasy and Romance. Simon & Schuster publishes it. It was published January 5th, 2021.

Perfect for fans of Geekerella and Jenn Bennett, this charming, sparkly rom-com follows a wish-granting teen forced to question if she’s really doing good—and if she has the power to make her own dreams come true.

Charity is a fairy godmother. She doesn’t wear a poofy dress or go around waving a wand, but she does make sure the deepest desires of the student population at Jack London High School come true. And she knows what they want even better than they do because she can glimpse their perfect futures.

But when Charity fulfills a glimpse that gets Vibha crowned homecoming queen, it ends in disaster. Suddenly, every wish Charity has ever granted is called into question. Has she really been helping people? Where do these glimpses come from, anyway? What if she’s not getting the whole picture?

Making this existential crisis way worse is Noah—the adorkable and (in Charity’s opinion) diabolical ex of one of her past clients—who blames her for sabotaging his prom plans and claims her interventions are doing more harm than good. He demands that she stop granting wishes and help him get his girl back. At first, Charity has no choice but to play along. But soon, Noah becomes an unexpected ally in getting to the bottom of the glimpses. Before long, Charity dares to call him her friend…and even starts to wish he were something more. But can the fairy godmother ever get the happily ever after?

Hi, book fam! It’s been a while as December took a huge toll on my mental health. I was functioning at my absolute minimum and had no energy except for Netflix and work. I barely read any books but, I’ve made my new year resolutions and am ready to kickstart the year right! And what better way to do that than with this uber-adorable and heartwarming read. A huge thank you to TBR and Beyond Tours for having me on the tour. May contain spoilers!

On it’s surface, Glimpsed appears to be a rather simple young adult contemporary: full of fluffy fluff and a romance designed to make you go “awwww”. But, there is more to this deceptively simple and fast-paced story which makes it such a great read to curl up with and chase away the blues (ironic, given the cover is blue!). Heartwarming and genuine, Glimpsed is a story about love and falling in love but more than that, it is about learning who you are and fulfilling your purpose in life; and, whether that purpose is what you think it is.

Charity has a single life’s purpose: to make dreams and wishes come true. And unlike the traditional fairy godmother we know and love from fairytales, Charity gets her calling through what she calls glimpses. In fact, this power is an inherited one but it seems to have skipped her mother and her sister, providing a source of contention within the family. These glimpses are visions of her Cindy’s (short for Cinderella) supposed future and their heart’s true desires which Charity tries her very best to make that vision come true. When she glimpses Vibha’s future as homecoming queen, it is just another day’s work. That is, until Noah crosses her path and starts to blackmail her about her magic, demanding satisfaction for a wrong he believes has been committed against him.

You see, Noah’s best friend and crush, Holly, was one of Charity’s Cindys and he never got to tell her how he felt before Charity whisked her away into the arms of another. But Noah does not agree with what Charity is doing with her fairy godmother duties and demands that she stop messing with their classmates’ lives, threatening to reveal it all unless she agrees to help him win Holly back in the right way. With no other choice in sight, Charity takes him on as an unofficial Cindy all the while, she is helping Vibha achieve her heart’s true desire. But when Vibha’s crowning becomes a disaster, Charity is forced to confront her role as fairy godmother; is it truly doing more harm as Noah suggests or is this just another setback for her to fix?

At the same time, Charity’s magic is making her sick and her family is growing more distant. Not to mention, Noah seems to be getting more adorkable the more time that they spend together. It seems like a lot to heft on a teenage fairy godmother’s shoulders but that’s what I felt was so wonderfully complex about Glimpsed. Instead of focusing solely on a romance plot which it could have and I would love it just the same, Glimpsed forces us to confront our preconceived hopes, dreams and purpose in life through Charity, making us question our intentions and our focuses in life.

But, it is also about family and looking inward rather than outward. Charity is so laser-focused on her Cindy’s lives that she ends up making herself miserable, neglecting to care about her own feelings and her self. She clings to a false hope of happiness, telling herself that it will all be okay rather than confronting the difficult emotions and truths. It was a nice contrast with Noah, challenging her beliefs in herself and the people around her. Plus, who doesn’t love a good enemies to lovers plot, am I right?

However, despite this, I would have loved for more complexity in terms of how the plot handled Charity confronting her family about her feelings of distance and needing more connection. With a family as emotionally-distant as hers, it would have been nice to take more time for Charity to connect again with her mother and sister as well as understand their emotions and feelings. It felt a little too nicely wrapped in a pretty bow.

Written from the first person point of view, it is hard for Charity not to standout but what makes Charity such a great character is how relatable she is. I often find that with YA contemporary characters, they’re so far removed from reality, it’s hard to relate to their circumstances.

Of course, Charity is a fairy godmother with magic powers and she also is a cheerleader and fairly popular in school but it is her struggles as a fairy godmother that truly resonates; at least with me. Led to believe her entire life that she is destined to be a fairy godmother and always ready to help her Cinderellas, Charity has no other goals in life which strange as it sounds, it something I struggle with very often. Being ambitious but being ambitious in the wrong way. Charity has a laser focus drive and she is single-minded in achieving her goals. She is also a high achiever in school with a reputation for being an ice princess; she has no time for romance of her own when she’s busy helping other achieve their happily ever afters.

At the same time, she is confronted with a lot of emotion in her life from her family, with a sister whom she loves but is based overseas, a mother who is too busy working to connect with her daughter and a grandmother who pushes her into being a fairy godmother; a sort of ironic situation. Until she meets Noah, that is.

Noah, on the other hand, is a direct contrast to Charity. He is a go with the flow kind of guy, a little bit all over the place with a family who dotes and adores him to embarrassment. Yet, it is a family filled with the kind of love Charity never truly experienced in her own. The beauty in this pairing is that Noah is a little misguided; the reason he strikes up this unlikely friendship with Charity is so that he can win his crush back from the arms of another man. A little toxic but very teenager of him, to believe that with enough effort and throwing himself in Holly’s path would be able to make her realise how much she actually likes him and fall in love with him. It is this flawed thinking that leads him to demand Charity stop doing the one thing that makes her fill fulfilled, which in his point of view is detrimental to others.

But, it is also his caring and kind nature that makes him stick with Charity, helping her work through the difficulties of her magic and being there for her when she needs him the most; as friends, in fact. Where Charity feels like she is never enough, he is there to encourage her to look beyond what she sees, to quote The Lion King 3, to believe that she is more than just a fairy godmother. He encourages her to never shortchange herself and to live a little. Admittedly, Noah helps Charity more than she helps him.

i’m a little teary eyed for these two, to be honest

Glimpsed in a beautifully detailed book; I can’t even begin to describe just how many elements have been cleverly woven into its tapestry. We’d sit here all day with this review if I did so! From intricate cosplays and down right silly ones, TV shows, cute retro diners and a lot of falling in love, Glimpsed is one of those underrated and overlooked novels that will warm your heart and make you believe in the ways love can change you for the better. It also makes you want to believe in yourself!

ARC RECEIVED IN EXCHANGE FOR AN HONEST REVIEW 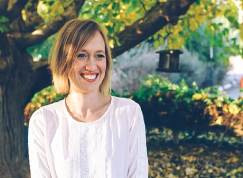 G.F. Miller can write 80,000-word novels, but ask her to sit down and write 250 true and meaningful words about herself and she is likely to have an existential crisis. Who am I, really? She ponders. What do I want to be known for? Does anyone even read the back flap or visit author websites?

But eventually she will pull herself together and tell you that…She married her college sweetheart and is mom to three littles who routinely make her heart burst and her head explode (it’s a messy business, love). There are puppies big and small residing at her house (you’ll be seeing a lot of them if you follow her on Instagram). She’s been to a dozen countries, but not nearly as many as she would like. She loves learning all the things. She cries at all the wrong times. She makes faces at herself in the mirror. She believes in the Oxford comma. And she’s always here for a dance party.

While the stories she has brewing in her soul vary wildly from one another, there are three things they will always have in common: love, snappy dialogue, and happy endings.

One person will win a finished copy of Glimpsed. This giveaway starts on January 5th and ends on January 12th. Click here for the Rafflecopter!

One thought on “More Magical Than Meets The Eye: Glimpsed – A Blog Tour Review”

Why talk when you can read?

Hi, I’m Avery! And welcome back to my blog! If you’re new here, this blog is dedicated to book reviews because I like to hear (or rather, read!) myself talk in the most pompous way possible.